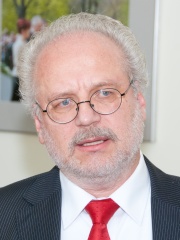 Egils Levits (born 30 June 1955) is a Latvian politician, lawyer, political scientist and jurist who has served as the tenth president of Latvia since 8 July 2019. He was a member of the European Court of Justice from 2004 to 2019.During the late Soviet-era, he was a member of the Popular Front of Latvia and contributed to the declaration of restored Latvian independence in 1990. He was vice-prime minister and minister for justice of Latvia from 1993 to 1994 and ambassador to Hungary, Austria and Switzerland from 1994 to 1995. Read more on Wikipedia

Among politicians, Egils Levits ranks 3,682 out of 15,577. Before him are Prince Charles, Count of Flanders, Rob Roy MacGregor, Sima Shi, Arsaces I of Parthia, Lucilla, and Ahmose. After him are Princess Christina, Mrs. Magnuson, Avery Brundage, Sundiata Keita, Emperor Wuzong of Tang, Reynaldo Bignone, and Qi of Xia.