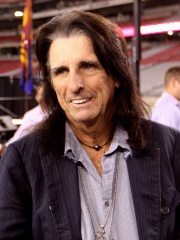 Alice Cooper (born Vincent Damon Furnier, February 4, 1948) is an American rock singer whose career spans over 54 years. With a raspy voice and a stage show that features numerous props and stage illusions, including pyrotechnics, guillotines, electric chairs, fake blood, reptiles, baby dolls, and dueling swords, Cooper is considered by music journalists and peers to be "The Godfather of Shock Rock". He has drawn equally from horror films, vaudeville, and garage rock to pioneer a macabre and theatrical brand of rock designed to shock audiences.Originating in Phoenix, Arizona, in 1964, "Alice Cooper" was originally a band with roots extending back to a band called The Earwigs, consisting of Furnier on vocals and harmonica, Glen Buxton on lead guitar, and Dennis Dunaway on bass guitar and background vocals. Read more on Wikipedia

Among musicians, Alice Cooper ranks 126 out of 2,662. Before him are Neil Young, John Dowland, Sid Vicious, Bill Wyman, Joe Hisaishi, and Stuart Sutcliffe. After him are Jacqueline du Pré, Till Lindemann, Roger Glover, Quincy Jones, Mariss Jansons, and Ray Manzarek.