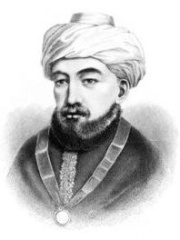 Moses ben Maimon (1138–1204), commonly known as Maimonides () and also referred to by the acronym Rambam (Hebrew: רמב״ם), was a Sephardic Jewish philosopher who became one of the most prolific and influential Torah scholars of the Middle Ages. In his time, he was also a preeminent astronomer and physician, serving as the personal physician of Saladin. Born in Córdoba, Almoravid Empire (present-day Spain), on Passover eve, 1138 (or 1135), he worked as a rabbi, physician and philosopher in Morocco and Egypt. Read more on Wikipedia

Since 2007, the English Wikipedia page of Maimonides has received more than 2,955,687 page views. His biography is available in 83 different languages on Wikipedia (up from 82 in 2019). Maimonides is the 89th most popular religious figure (down from 73rd in 2019), the 24th most popular biography from Spain and the 3rd most popular Spanish Religious Figure.

Maimonides is most famous for his writings on Jewish law, such as the Mishneh Torah and the Guide for the Perplexed.

Page views of Maimonides by language

Among religious figures, Maimonides ranks 89 out of 2,238. Before him are Philip the Apostle, Pope Benedict XV, Jude the Apostle, Saint Anne, Pope Paul III, and Pope Leo XIII. After him are Teresa of Ávila, Saint Lawrence, Methuselah, Elisha, Pope Innocent III, and Saint Dominic.