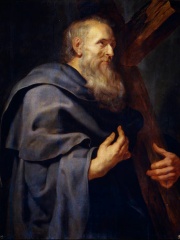 Philip the Apostle (Greek: Φίλιππος; Aramaic: ܦܝܠܝܦܘܣ; Coptic: ⲫⲓⲗⲓⲡⲡⲟⲥ, Philippos) was one of the Twelve Apostles of Jesus according to the New Testament. Later Christian traditions describe Philip as the apostle who preached in Greece, Syria, and Phrygia. In the Roman Rite, the feast day of Philip, along with that of James the Less, was traditionally observed on 1 May, the anniversary of the dedication of the church dedicated to them in Rome (now called the Church of the Twelve Apostles). Read more on Wikipedia

Philip the Apostle is most famous for his conversion of the Ethiopian eunuch, which is recounted in Acts 8:26-40.

Page views of Philip the Apostles by language

Among religious figures, Philip the Apostle ranks 83 out of 2,238. Before him are Ezekiel, Mark the Evangelist, Romulus Augustulus, Isaiah, Pope Pius X, and Hasan ibn Ali. After him are Pope Benedict XV, Jude the Apostle, Saint Anne, Pope Paul III, Pope Leo XIII, and Maimonides.