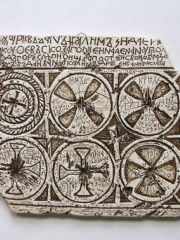 Kulin (Serbo-Croatian Cyrillic: Кулин; d. c. November 1204) was the Ban of Bosnia from 1180 to 1204, first as a vassal of the Byzantine Empire and then of the Kingdom of Hungary, although his state was de facto independent. Read more on Wikipedia

Among politicians, Ban Kulin ranks 4,323 out of 15,577. Before him are Henry IV, Duke of Saxony, Charles G. Dawes, Psusennes II, Drypetis, Prince Albert of Prussia, and Ivan Alexander of Bulgaria. After him are Ardashir II, Andrianampoinimerina, Boran, André de Montbard, Yolanda of Flanders, and Ferdinand Albert II, Duke of Brunswick-Wolfenbüttel.

Among people born in 1163, Ban Kulin ranks 2. Before him is Canute VI of Denmark. After him are Hōjō Yoshitoki, Henry the Bearded, Emperor Xuanzong of Jin, and Douce II, Countess of Provence. Among people deceased in 1204, Ban Kulin ranks 9. Before him are Isaac II Angelos, Alexios IV Angelos, Alexios V Doukas, Emeric, King of Hungary, Nicholas Kanabos, and Haakon III of Norway. After him are Nur ad-Din al-Bitruji, Minamoto no Yoriie, Berthold, Duke of Merania, Suleiman II, Marie of Champagne, and Guttorm of Norway.