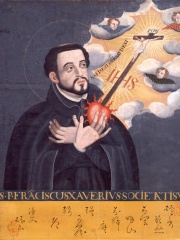 Francis Xavier (born Francisco de Jasso y Azpilicueta; Latin Franciscus Xaverius; Basque: Frantzisko Xabierkoa; Spanish: Francisco Javier; Portuguese: Francisco Xavier; April 7, 1506 – December 3, 1552), venerated as Saint Francis Xavier, was a Spanish Catholic priest, missionary and saint from Navarre who was the co-founder of the Society of Jesus. Born in Javier (Xavier in Old Spanish and in Navarro-Aragonese), Kingdom of Navarre (in present-day Spain), he was a companion of Ignatius of Loyola and one of the first seven Jesuits who took vows of poverty and chastity at Montmartre, Paris, in 1534. He led an extensive mission into Asia, mainly in the Portuguese Empire of the time and was influential in evangelization work, most notably in India. Read more on Wikipedia

Since 2007, the English Wikipedia page of Francis Xavier has received more than 2,206,241 page views. His biography is available in 68 different languages on Wikipedia making him the 111th most popular religious figure.