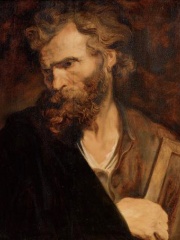 Jude (Greek: Ἰούδας Ἰακώβου translit. Ioúdas Iakóbou) was one of the Twelve Apostles of Jesus according to the New Testament. He is generally identified as Thaddeus (Greek: Θαδδαῖος; Coptic: ⲑⲁⲇⲇⲉⲟⲥ; Syriac/Aramaic: ܝܗܘܕܐ ܫܠܝܚܐ), and is also variously called Judas Thaddaeus, Jude Thaddaeus, Jude of James, or Lebbaeus and is considered as the founding father and the first Catholicos-Patriarch of the Armenian Apostolic Church. Read more on Wikipedia

Jude the apostle is most famous for his letter, which is part of the New Testament.

Page views of Jude the Apostles by language

Among religious figures, Jude the Apostle ranks 85 out of 2,238. Before him are Romulus Augustulus, Isaiah, Pope Pius X, Hasan ibn Ali, Philip the Apostle, and Pope Benedict XV. After him are Saint Anne, Pope Paul III, Pope Leo XIII, Maimonides, Teresa of Ávila, and Saint Lawrence.