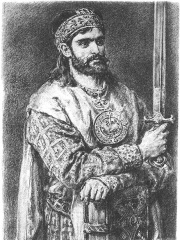 Casimir II the Just (Polish: Kazimierz II Sprawiedliwy; 28 October 1138 – 5 May 1194) was a Lesser Polish Duke of Wiślica from 1166–1173, and of Sandomierz after 1173. He became ruler over the Polish Seniorate Province at Kraków and thereby High Duke of Poland in 1177; a position he held until his death, though interrupted once by his elder brother and predecessor Mieszko III the Old. In 1186 Casimir also inherited the Duchy of Masovia from his nephew Leszek, becoming the progenitor of the Masovian branch of the royal Piast dynasty, and great-grandfather of the later Polish king Władysław I the Elbow-high. Read more on Wikipedia

Page views of Casimir II the Justs by language

Among politicians, Casimir II the Just ranks 5,800 out of 15,710. Before him are Infanta Cristina of Spain, Samuel Adams, Alparslan Türkeş, Karl August von Hardenberg, Robert Todd Lincoln, and Zubaidah bint Ja`far. After him are Emperor Go-Nijō, Prince Rupert of the Rhine, Ashur-dan III, Koča Popović, Nicolas Henri, Duke of Orléans, and Al-Musta'in.