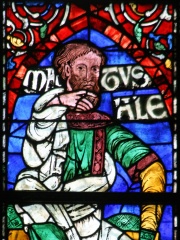 Methuselah (Hebrew: מְתוּשֶׁלַח Məṯūšélaḥ, in pausa מְתוּשָׁלַח Məṯūšā́laḥ, "Man of the javelin" or "Death of Sword"; Greek: Μαθουσαλά Mathousalá) was a biblical patriarch and a figure in Judaism, Christianity, and Islam. Said to have died at the age of 969, he lived the longest of all figures mentioned in the Bible. According to the Book of Genesis, Methuselah was the son of Enoch, the father of Lamech, and the grandfather of Noah. Read more on Wikipedia

Since 2007, the English Wikipedia page of Methuselah has received more than 2,821,512 page views. His biography is available in 46 different languages on Wikipedia making him the 84th most popular religious figure.

Page views of Methuselahs by language