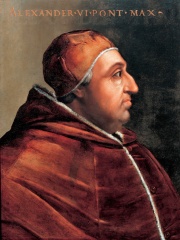 Pope Alexander VI, born Rodrigo de Borja (Valencian: Roderic Llançol i de Borja [roðeˈɾiɡ ʎanˈsɔl i ðe ˈbɔɾdʒa], Spanish: Rodrigo Lanzol y de Borja [roˈðɾiɣo lanˈθol i ðe ˈβoɾxa]; 1 January 1431 – 18 August 1503), was Pope from 11 August 1492 until his death in 1503. Born into the prominent Borgia family in Xàtiva in the Crown of Aragon (now Spain), Rodrigo studied law at the University of Bologna. He was ordained deacon and made a cardinal in 1456 after the election of his uncle as Pope Callistus III, and a year later he became vice-chancellor of the Catholic Church. Read more on Wikipedia

Since 2007, the English Wikipedia page of Pope Alexander VI has received more than 4,096,669 page views. His biography is available in 80 different languages on Wikipedia making him the 42nd most popular religious figure.

Among religious figures, Pope Alexander VI ranks 44 out of 2,001. Before him are 14th Dalai Lama, Ignatius of Loyola, Bartholomew the Apostle, Husayn ibn Ali, Ruhollah Khomeini, and Isaac. After him are Pope Clement VII, Benedict of Nursia, Pope Gregory I, Saint Valentine, Romulus Augustulus, and Thomas the Apostle.

Among people born in 1431, Pope Alexander VI ranks 2. Before him is Vlad the Impaler. After him are François Villon, Andrea Mantegna, Ercole I d'Este, Duke of Ferrara, Ladislaus Hunyadi, Jasper Tudor, and John Neville, 1st Marquess of Montagu. Among people deceased in 1503, Pope Alexander VI ranks 1. After him are Pope Pius III, Elizabeth of York, Sophia Palaiologina, Piero the Unfortunate, Sten Sture the Elder, Peter II, Duke of Bourbon, Margaret of York, George, Duke of Bavaria, Pierre d'Aubusson, and Bona of Savoy.