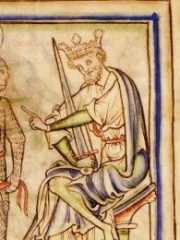 Harold I (died 17 March 1040), also known as Harold Harefoot, was King of the English from 1035 to 1040. Harold's nickname "Harefoot" is first recorded as "Harefoh" or "Harefah" in the twelfth century in the history of Ely Abbey, and according to some late medieval chroniclers it meant that he was "fleet of foot".The son of Cnut the Great and Ælfgifu of Northampton, Harold was elected regent of England following the death of his father in 1035. He initially ruled England in place of his brother Harthacnut, who was stuck in Denmark due to a rebellion in Norway which had ousted their brother Svein. Read more on Wikipedia

Harold Harefoot is most famous for being a King of England from 1035 to 1040. He was the son of Æthelred the Unready and Emma of Normandy.

Among noblemen, Harold Harefoot ranks 20 out of 842. Before him are Princess Margaret, Countess of Snowdon, Albert, Prince Consort, Rudolf, Crown Prince of Austria, Lucrezia Borgia, Juan Carlos I of Spain, and Grand Duchess Anastasia Nikolaevna of Russia. After him are Anne of Austria, Şehzade Mehmed, Rollo, Philippe I, Duke of Orléans, Grand Duchess Olga Nikolaevna of Russia, and Ramesses I.

Among people born in 1016, Harold Harefoot ranks 1. After him are Henry III, Holy Roman Emperor, Robert Guiscard, Ferdinand I of León, Béla I of Hungary, Casimir I the Restorer, Amadeus I, Count of Savoy, Emperor Xingzong of Liao, Deokjong of Goryeo, Edward the Exile, Naropa, and Svein Knutsson. Among people deceased in 1040, Harold Harefoot ranks 1. After him are Duncan I of Scotland, Fulk III, Count of Anjou, Alan III, Duke of Brittany, and Ælfgifu of Northampton.