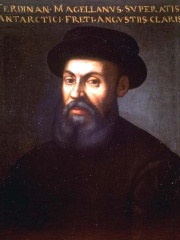 Ferdinand Magellan ( or ; Portuguese: Fernão de Magalhães, IPA: [fɨɾˈnɐ̃w dɨ mɐɣɐˈʎɐ̃jʃ]; Spanish: Fernando de Magallanes, IPA: [feɾˈnando ðe maɣaˈʎanes]; 4 February 1480 – 27 April 1521) was a Portuguese explorer and a subject of the Hispanic Monarchy from 1518. He is best known for having planned and led the 1519 Spanish expedition to the East Indies across the Pacific Ocean to open a maritime trade route, during which he discovered the interoceanic passage bearing thereafter his name and achieved the first European navigation from the Atlantic to Asia. During this voyage, Magellan was killed in the Battle of Mactan in 1521 in the present-day Philippines, after running into resistance by the indigenous population led by Lapulapu, who consequently became in the Philippines a national symbol of resistance to colonialism. Read more on Wikipedia

Ferdinand Magellan is most famous for being the first person to circumnavigate the globe.

Among explorers, Ferdinand Magellan ranks 3 out of 405. Before him are Marco Polo and Christopher Columbus. After him are Vasco da Gama, Amerigo Vespucci, Bartolomeu Dias, Roald Amundsen, Ibn Battuta, James Cook, Hernán Cortés, Zheng He, and Francis Drake.