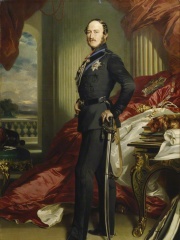 Prince Albert of Saxe-Coburg and Gotha (Franz August Karl Albert Emanuel; 26 August 1819 – 14 December 1861) was the consort of Queen Victoria from their marriage on 10 February 1840 until his death in 1861. Albert was born in the Saxon duchy of Saxe-Coburg-Saalfeld to a family connected to many of Europe's ruling monarchs. At the age of twenty, he married his first cousin Victoria; they had nine children. Read more on Wikipedia

Albert, Prince Consort was Queen Victoria's husband and he was most famous for being her consort.

Among noblemen, Albert, Prince Consort ranks 15 out of 842. Before him are Akihito, Archduke Franz Ferdinand of Austria, Queen Elizabeth The Queen Mother, William the Conqueror, Charles, Prince of Wales, and Princess Margaret, Countess of Snowdon. After him are Rudolf, Crown Prince of Austria, Lucrezia Borgia, Juan Carlos I of Spain, Grand Duchess Anastasia Nikolaevna of Russia, Harold Harefoot, and Anne of Austria.