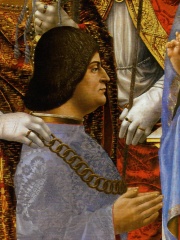 Ludovico Maria Sforza (Italian: [ludoˈviːko maˈriːa ˈsfɔrtsa]; 27 July 1452 – 27 May 1508), also known as Ludovico il Moro (Italian: [il ˈmɔːro]; "the Moor"). "Arbiter of Italy", according to the expression used by Guicciardini, was an Italian Renaissance nobleman who ruled as Duke of Milan from 1494 to 1499. Endowed with rare intellect and very ambitious, he managed, although fourth son, to acquire dominion over Milan, first subtracting the regency from his unwary sister-in-law Bona, then taking over from his late nephew Gian Galeazzo who, it is said, he had poisoned. Read more on Wikipedia

Among noblemen, Ludovico Sforza ranks 37 out of 842. Before him are Naruhito, Rainier III, Prince of Monaco, Marie de' Medici, Ramesses III, Alexei Nikolaevich, Tsarevich of Russia, and El Cid. After him are Marie Thérèse of France, Otto von Habsburg, Alexander Nevsky, Queen Sofía of Spain, Pope Leo IX, and Princess Beatrice of the United Kingdom.

Among people born in 1452, Ludovico Sforza ranks 5. Before him are Leonardo da Vinci, Richard III of England, Girolamo Savonarola, and Ferdinand II of Aragon. After him are Abraham Zacuto, Prospero Colonna, Joanna, Princess of Portugal, and Davide Ghirlandaio. Among people deceased in 1508, Ludovico Sforza ranks 1. After him are Beatrice of Naples, Isaac Abarbanel, René II, Duke of Lorraine, Albert IV, Duke of Bavaria, Conrad Celtes, Guidobaldo da Montefeltro, Philip, Elector Palatine, Radu IV the Great, Nephon II of Constantinople, and Nilus of Sora.