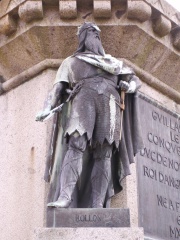 Rollo (Norman: Rou; Old Norse: Hrólfr; French: Rollon; c. 860 – c. 930 AD) was a Viking who became the first ruler of Normandy, a region in northern France. He emerged as the outstanding warrior among the Norsemen who had secured a permanent foothold on Frankish soil in the valley of the lower Seine. After the Siege of Chartres in 911, Charles the Simple, the king of West Francia, gifted them lands between the mouth of the Seine and what is now Rouen in exchange for Rollo agreeing to end his brigandage, swearing allegiance to him, religious conversion and a pledge to defend the Seine's estuary from viking raiders.Rollo is first recorded as the leader of these Viking settlers in a charter of 918, and he continued to reign over the region of Normandy until at least 928. Read more on Wikipedia

Since 2007, the English Wikipedia page of Rollo has received more than 5,388,275 page views. His biography is available in 48 different languages on Wikipedia (up from 47 in 2019). Rollo is the 13th most popular nobleman (up from 18th in 2019), the 7th most popular biography from Norway (up from 9th in 2019) and the most popular Norwegian Nobleman.

Page views of Rollos by language

Among noblemen, Rollo ranks 13 out of 843. Before him are Prince Philip, Duke of Edinburgh, Queen Elizabeth The Queen Mother, Margrethe II of Denmark, Archduke Franz Ferdinand of Austria, Lucrezia Borgia, and Akihito. After him are Charles, Prince of Wales, Princess Margaret, Countess of Snowdon, Juan Carlos I of Spain, Grand Duchess Anastasia Nikolaevna of Russia, Harold Harefoot, and Philippe I, Duke of Orléans.

Among NOBLEMEN In Norway