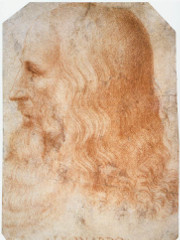 Leonardo di ser Piero da Vinci (15 April 1452 – 2 May 1519) was an Italian polymath of the High Renaissance who was active as a painter, draughtsman, engineer, scientist, theorist, sculptor, and architect. While his fame initially rested on his achievements as a painter, he also became known for his notebooks, in which he made drawings and notes on a variety of subjects, including anatomy, astronomy, botany, cartography, painting, and paleontology. Leonardo is widely regarded to have been a genius who epitomized the Renaissance humanist ideal, and his collective works comprise a contribution to later generations of artists matched only by that of his younger contemporary, Michelangelo.Born out of wedlock to a successful notary and a lower-class woman in, or near, Vinci, he was educated in Florence by the Italian painter and sculptor Andrea del Verrocchio. Read more on Wikipedia

Leonardo da Vinci is most famous for his paintings of the Mona Lisa and The Last Supper.

Among INVENTORS In Italy