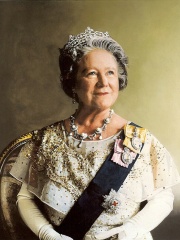 Elizabeth Angela Marguerite Bowes-Lyon (4 August 1900 – 30 March 2002) was Queen of the United Kingdom and the Dominions of the British Commonwealth from 11 December 1936 to 6 February 1952 as the wife of King George VI. She was the last Empress of India from her husband's accession 1936 until the British Raj was dissolved in August 1947. After her husband died, she was known as Queen Elizabeth The Queen Mother, to avoid confusion with her daughter, Queen Elizabeth II. Born into a family of British nobility, Elizabeth came to prominence in 1923 when she married the Duke of York, the second son of King George V and Queen Mary. The couple and their daughters Elizabeth and Margaret embodied traditional ideas of family and public service. Read more on Wikipedia

Page views of Queen Elizabeth The Queen Mothers by language

Among noblemen, Queen Elizabeth The Queen Mother ranks 11 out of 842. Before her are Ragnar Lodbrok, Catherine the Great, Prince Philip, Duke of Edinburgh, Margrethe II of Denmark, Akihito, and Archduke Franz Ferdinand of Austria. After her are William the Conqueror, Charles, Prince of Wales, Princess Margaret, Countess of Snowdon, Albert, Prince Consort, Rudolf, Crown Prince of Austria, and Lucrezia Borgia.