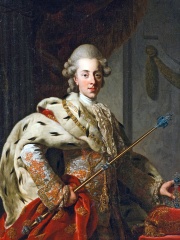 Christian VII (29 January 1749 – 13 March 1808) was a monarch of the House of Oldenburg who was King of Denmark–Norway and Duke of Schleswig and Holstein from 1766 until his death in 1808. For his motto he chose: "Gloria ex amore patriae" ("Glory through love of the fatherland").Christian VII's reign was marked by mental illness and for most of his reign, Christian was only nominally king. His royal advisers changed depending on who won power struggles around the throne. From 1770 to 1772, his court physician Johann Friedrich Struensee was the de facto ruler of the country and introduced progressive reforms signed into law by Christian VII. Read more on Wikipedia

Christian VII was the King of Denmark and Norway from 1766 until 1808. He was the son of King Frederick V and his first wife Louise of Great Britain. Christian's reign was marked by mental illness and for most of his reign, power was exercised by his half-brother Frederick VI. In 1808, Christian was deposed in a coup and the Danish monarchy was abolished.

Page views of Christian VII of Denmarks by language

Among politicians, Christian VII of Denmark ranks 500 out of 15,577. Before him are Alfonso XIII of Spain, Yazid I, Cnut the Great, Tahmasp I, John II of France, and Hafez al-Assad. After him are Jean-Baptiste Colbert, Heraklonas, Sukarno, Frederick William I of Prussia, Abdulmejid II, and Norodom Sihanouk.