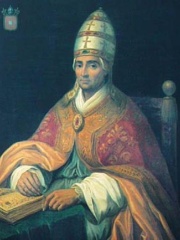 Pope Benedict XII (Latin: Benedictus XII, French: Benoît XII; 1285 – 25 April 1342), born Jacques Fournier, was head of the Catholic Church from 30 December 1334 to his death in April 1342. He was the third Avignon pope. Benedict was a careful pope who reformed monastic orders and opposed nepotism. Read more on Wikipedia

Pope Benedict xii is most famous for his role in the resistance against Nazism and the Holocaust. He was the first pope to speak out against the Nazi regime, and he helped to save thousands of Jews from persecution.

Among people born in 1280, Pope Benedict XII ranks 1. After him are Musa I of Mali, Öljaitü, Pietro Lorenzetti, Birger, King of Sweden, Michael Shishman of Bulgaria, Blanche of Anjou, John Koukouzelis, Anne of Austria, Margravine of Brandenburg, Ugolino di Nerio, and Stefan Vladislav II. Among people deceased in 1342, Pope Benedict XII ranks 1. After him are Charles I of Hungary, Marsilius of Padua, Robert III of Artois, Peter II of Sicily, Anna of Trebizond, Tini Beg, Bartolomeo Gradenigo, and Joan of Valois, Countess of Hainaut.