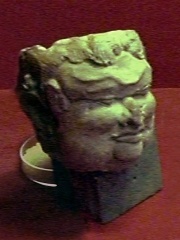 Gajah Mada (c. 1290 – c. 1364), also known as Jirnnodhara was, according to Old Javanese manuscripts, poems, and mythology, a powerful military leader and Mahapatih (the approximate equivalent of a modern Prime Minister) of the Javanese empire of Majapahit during the 14th century. Read more on Wikipedia

Among politicians, Gajah Mada ranks 4,422 out of 15,710. Before him are Chadli Bendjedid, Princess Christina, Mrs. Magnuson, Carmen Franco, 1st Duchess of Franco, Shiban, Imi Lichtenfeld, and Emperor Ai of Han. After him are Ivaylo of Bulgaria, Janez Janša, Ahilyabai Holkar, Pedro Pires, Mao Anying, and Fruela II of Asturias.

Among people born in 1290, Gajah Mada ranks 7. Before him are Ambrogio Lorenzetti, Margaret of Burgundy, Queen of France, Andrea Pisano, Leopold I, Duke of Austria, Rustichello da Pisa, and Taddeo Gaddi. After him are Muhammad bin Tughluq, John Parricida, Bernardo Daddi, Barlaam of Seminara, Beatrice of Silesia, and Jacob van Artevelde. Among people deceased in 1364, Gajah Mada ranks 3. Before him are John II of France and Valdemar III of Denmark. After him are Charles, Duke of Brittany, Edward Balliol, Agnes of Austria, Emperor Kōgon, Robert, Prince of Taranto, Elisenda of Montcada, Nicholas Alexander of Wallachia, and Longchenpa.