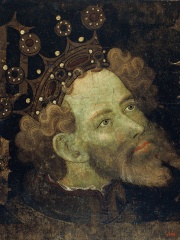 Peter IV (Catalan: Pere IV; 5 September 1319 – 6 January 1387), called the Ceremonious (Catalan: el Cerimoniós), was from 1336 until his death the king of Aragon, Sardinia-Corsica, and Valencia, and count of Barcelona. In 1344, he deposed James III of Majorca and made himself King of Majorca. His reign was occupied with attempts to strengthen the crown against the Union of Aragon and other such devices of the nobility, with their near constant revolts, and with foreign wars, in Sardinia, Sicily, the Mezzogiorno, Greece, and the Balearics. Read more on Wikipedia

Peter IV of Aragon is most famous for his conquest of the Kingdom of Majorca in 1343.

Page views of Peter IV of Aragons by language

Among politicians, Peter IV of Aragon ranks 1,734 out of 15,577. Before him are Ahmet Necdet Sezer, Conrad I of Germany, Bernie Sanders, Yun Posun, Emperor Huizong of Song, and Catherine Jagiellon. After him are Desiderius, Augusta Victoria of Schleswig-Holstein, Hiero II of Syracuse, Hu Yaobang, Publius Clodius Pulcher, and Levi Eshkol.