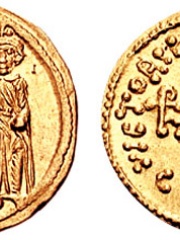 Constantine Heraclius (Greek: Κωνσταντῖνος Ἡράκλειος, romanized: Kōnstantînos Hērákleios; 626–641), commonly known by the diminutive Heraklonas or Herakleonas (Greek: Ἡρακλ[ε]ωνᾶς), and more rarely as Heraclius II, was the son of Heraclius and his niece Martina. His father had stipulated in his will that both of his sons, Heraklonas and Constantine III, should rule jointly upon his death. Heraclius also specified that his wife, Martina, was to be called "Mother and Empress" insofar as she might have influence at court as well. Read more on Wikipedia

Heraklion is most famous for the Palace of Knossos, which was the palace of King Minos. It is also the site of the Archaeological Museum of Heraklion.

Page views of Heraklonas by language

Among politicians, Heraklonas ranks 558 out of 15,710. Before him are Ivan III of Russia, Zoë Porphyrogenita, Bernie Sanders, Irene of Athens, Anthony Eden, and Philip V of France. After him are Frederick William I of Prussia, Oscar II of Sweden, Hatice Sultan, Françoise-Athénaïs de Rochechouart, Marquise de Montespan, Oscar I of Sweden, and Gerhard Schröder.