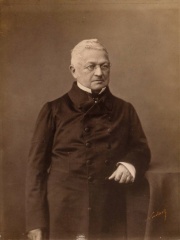 Marie Joseph Louis Adolphe Thiers ( tee-AIR, French: [maʁi ʒɔzɛf lwi adɔlf tjɛʁ]; 15 April 1797 – 3 September 1877) was a French statesman and historian. He was the second elected President of France, and the first President of the French Third Republic. Thiers was a key figure in the July Revolution of 1830, which overthrew the Bourbon monarchy, and the French Revolution of 1848, which established the Second French Republic. Read more on Wikipedia

Adolphe Thiers was a French politician who is most famous for being the first president of the Third Republic of France.

Among politicians, Adolphe Thiers ranks 1,003 out of 15,710. Before him are Robert I, Duke of Normandy, Philip III of Macedon, Alfonso VI of León and Castile, Jiang Qing, Æthelwulf, King of Wessex, and Władysław III of Poland. After him are William Howard Taft, Emperor Gaozong of Tang, Jérôme Bonaparte, Frederick III of Denmark, Dionysius I of Syracuse, and Wojciech Jaruzelski.