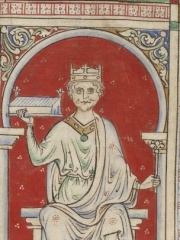 William II (Anglo-Norman: Williame; c. 1056 – 2 August 1100), the third son of William the Conqueror, was King of England from 26 September 1087 until his death in 1100, with powers over Normandy, and influence in Scotland. He was less successful in extending control into Wales. William is commonly referred to as William Rufus (Rufus being Latin for "the Red"), perhaps because of his ruddy appearance or, more likely, due to having red hair as a child that grew out in later life.William was a figure of complex temperament, capable of both bellicosity and flamboyance. Read more on Wikipedia

William II, also known as William Rufus, was the third son of William the Conqueror. He was crowned king of England in 1087, and is most famous for his death at the hands of an assassin while hunting in the New Forest in 1100.

Page views of William II of Englands by language

Among politicians, William II of England ranks 1,412 out of 15,710. Before him are Alexander Farnese, Duke of Parma, Friedrich Ratzel, Mary of Guise, Theodoric I, Anne Neville, and Jehoiakim. After him are Peter of Castile, Gyula Andrássy, Chlodio, Sulayman ibn Abd al-Malik, Theresa May, and Sarah Palin.

Among people born in 1056, William II of England ranks 1. After him are Nestor the Chronicler, Al-Muqtadi, Sæmundr fróði, Baldwin II, Count of Hainaut, Judith of Bohemia, and Cecilia of Normandy. Among people deceased in 1100, William II of England ranks 3. Before him are Godfrey of Bouillon and Parascheva of the Balkans. After him are Antipope Clement III, Emperor Zhezong, George Kedrenos, Bretislav II, Naropa, and Edmund of Scotland.