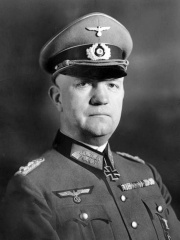 Friedrich Wilhelm Waldemar Fromm (8 October 1888 – 12 March 1945) was a German Army officer. In World War II, Fromm was Commander in Chief of the Replacement Army (Ersatzheer), in charge of training and personnel replacement for combat divisions of the German Army, a position he occupied for most of the war. Read more on Wikipedia

Friedrich Fromm was a German psychoanalyst who is most famous for his theory of the human personality. He believed that there are three different levels of personality: the id, the ego, and the superego. The id is the most primitive level of personality and is responsible for instinctual urges. The ego is the part of the personality that is rational and logical and is in charge of the individual's day-to-day functioning. The superego is the moral component of personality, which dictates what is right and wrong.

Among politicians, Friedrich Fromm ranks 1,475 out of 15,710. Before him are John IV Laskaris, Ehud Barak, Edmund I, Abel, King of Denmark, Archduchess Sophie of Austria, and Emperor Xian of Han. After him are John Sigismund Zápolya, Amon of Judah, Ismail Ibn Sharif, Jiajing Emperor, Robert Ley, and Mongkut.