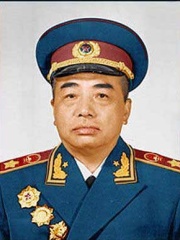 Peng Dehuai (Chinese: 彭德怀; October 24, 1898 – November 29, 1974) was a prominent Chinese Communist military leader, who served as China's Defense Minister from 1954 to 1959. Peng was born into a poor peasant family, and received several years of primary education before his family's poverty forced him to suspend his education at the age of ten, and to work for several years as a manual laborer. When he was sixteen, Peng became a professional soldier. Read more on Wikipedia

Peng Dehuai was a military leader in the People's Republic of China. He is most famous for his role in the Korean War, where he commanded the Chinese forces that fought alongside North Korea.

Among politicians, Peng Dehuai ranks 2,300 out of 15,710. Before him are Jephthah, Milada Horáková, Gian Galeazzo Visconti, Kęstutis, Nogai Khan, and Julius Nyerere. After him are Hyeonjong of Joseon, Clovis IV, Maximilian III Joseph, Elector of Bavaria, Nikola Pašić, Seleucus II Callinicus, and Jebe.