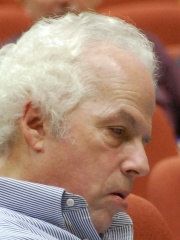 Stanley Benjamin Prusiner (born May 28, 1942) is an American neurologist and biochemist. He is the director of the Institute for Neurodegenerative Diseases at University of California, San Francisco (UCSF). Prusiner discovered prions, a class of infectious self-reproducing pathogens primarily or solely composed of protein. He received the Albert Lasker Award for Basic Medical Research in 1994 and the Nobel Prize in Physiology or Medicine in 1997 for prion research developed by him and his team of experts (David E. Garfin, D. P. Stites, W. J. Hadlow, C. W. Read more on Wikipedia

Stanley B. Prusiner is most famous for his discovery of prions. Prions are a type of protein that can be found in the brain, spinal cord, and other parts of the nervous system. They are not alive, but they can cause disease.

Page views of Stanley B. Prusiners by language

Among chemists, Stanley B. Prusiner ranks 136 out of 510. Before him are John Macleod, Christian B. Anfinsen, Lars Onsager, George Andrew Olah, Manfred Eigen, and Fritz Strassmann. After him are Kurt Wüthrich, Jean-Baptiste Dumas, Ascanio Sobrero, Jean-Marie Lehn, John Frederic Daniell, and Clara Immerwahr.