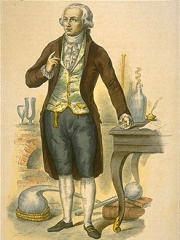 Antoine-Laurent de Lavoisier (French: [ɑ̃twan lɔʁɑ̃ də lavwazje] UK: lav-WUZ-ee-ay, US: lə-VWAH-zee-ay,; 26 August 1743 – 8 May 1794), also Antoine Lavoisier after the French Revolution, was a French nobleman and chemist who was central to the 18th-century chemical revolution and who had a large influence on both the history of chemistry and the history of biology. It is generally accepted that Lavoisier's great accomplishments in chemistry stem largely from his changing the science from a qualitative to a quantitative one. Lavoisier is most noted for his discovery of the role oxygen plays in combustion. Read more on Wikipedia

Antoine Lavoisier is most famous for his work in chemistry. He discovered that water is made up of two parts hydrogen and one part oxygen. He also discovered the law of conservation of mass, which states that matter cannot be created or destroyed, only transformed.