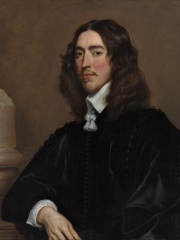 Johan de Witt (Dutch pronunciation: [ˈjoːɦɑn də ˈʋɪt]; 24 September 1625 – 20 August 1672), lord of Zuid- en Noord-Linschoten, Snelrewaard, Hekendorp en IJsselvere, was a Dutch statesman and a major political figure in the Dutch Republic in the mid-17th century, the First Stadtholderless Period, when its flourishing sea trade in a period of globalization made the republic a leading European trading and seafaring power – now commonly referred to as the Dutch Golden Age. De Witt controlled the Dutch political system from around 1650 until shortly before his murder and cannibalisation by a pro-Orangist mob in 1672.As a leading republican of the Dutch States Party, de Witt opposed the House of Orange-Nassau and the Orangists and preferred a shift of power from the central government to the regenten. However, his neglect of the Dutch army (as the regents focused only on merchant vessels, thinking they could avoid war) proved disastrous when the Dutch Republic suffered numerous early defeats in the Rampjaar (1672). Read more on Wikipedia

Johan de Witt is most famous for being a Dutch statesman who was assassinated in 1672.