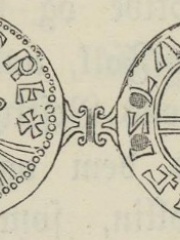 Magnus Olafsson (Old Norse: Magnús Óláfsson; Norwegian and Danish: Magnus Olavsson; c. 1024 – 25 October 1047), better known as Magnus the Good (Old Norse: Magnús góði, Norwegian and Danish: Magnus den gode), was King of Norway from 1035 and King of Denmark from 1042 until his death in 1047. Magnus was an illegitimate son of King Olaf II of Norway, and fled with his mother Alfhild when his father was dethroned in 1028. He returned to Norway in 1035 and was crowned king at the age of 11. Read more on Wikipedia

Magnus the good, also known as Magnus I, was king of Norway from 1035 to 1047. He is most famous for his unification of Norway and his introduction of Christianity.

Page views of Magnus the Goods by language

Among politicians, Magnus the Good ranks 1,983 out of 15,577. Before him are Isabella of Aragon, Queen of France, Victor Lustig, Mohamed Hussein Tantawi, Vigdís Finnbogadóttir, John, Prince of Asturias, and Hisham ibn Abd al-Malik. After him are Damdin Sükhbaatar, Nicolas Fouquet, Princess Joséphine Charlotte of Belgium, Eric the Victorious, Yakov Sverdlov, and Heinrich Brüning.

Among people born in 1024, Magnus the Good ranks 1. After him are Robert of Molesme, Iziaslav I of Kiev, William VIII, Duke of Aquitaine, Hugh of Cluny, Matilda of Frisia, Gagik II of Armenia, and Richard I of Capua. Among people deceased in 1047, Magnus the Good ranks 2. Before him is Pope Clement II. After him are Humbert I, Count of Savoy, Rodulfus Glaber, Henry VII, Duke of Bavaria, Otto II, Duke of Swabia, and Eustace I, Count of Boulogne.