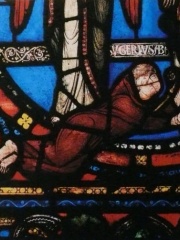 Since 2007, the English Wikipedia page of Suger has received more than 211,564 page views. His biography is available in 33 different languages on Wikipedia making him the 48th most popular architect.

Page views of Sugers by language

Among people born in 1080, Suger ranks 3. Before him are Avempace and Pope Eugene III. After him are Norbert of Xanten, Theresa, Countess of Portugal, Isidore the Laborer, Matilda of Scotland, Sanai, Raymond du Puy, Fakhr al-Mulk Radwan, William of Conches, and William of Malmesbury. Among people deceased in 1151, Suger ranks 2. Before him is Geoffrey Plantagenet, Count of Anjou. After him are Alice of Antioch and Adeliza of Louvain.