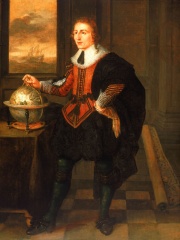 William Baffin (c. 1584 – 23 January 1622) was an English navigator, explorer and cartographer. He is primarily known for his attempt to discover a Northwest Passage from the Atlantic to the Pacific, during the course of which he was the first European to discover Baffin Bay in present-day Canada. Read more on Wikipedia

William Baffin is most famous for being the first European to see the Baffin Bay, which he named in 1616.

Among people born in 1584, William Baffin ranks 4. Before him are Miyamoto Musashi, Margaret of Austria, Queen of Spain, and Frederick Henry, Prince of Orange. After him are Francisco de Quevedo, Catherine of Sweden, Countess Palatine of Kleeburg, Yuan Chonghuan, Matthias Gallas, Cornelis de Vos, Herman Wrangel, Caspar Barlaeus, and Francis Beaumont. Among people deceased in 1622, William Baffin ranks 3. Before him are Osman II and Francis de Sales. After him are Hasekura Tsunenaga, Petrus Plancius, Ranuccio I Farnese, Duke of Parma, Fidelis of Sigmaringen, John Rolfe, John II, Duke of Schleswig-Holstein-Sonderburg, Bartolomeo Manfredi, Frans Pourbus the Younger, and Michael Maier.