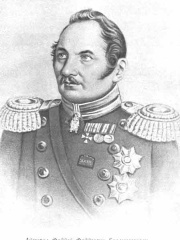 Fabian Gottlieb Thaddeus von Bellingshausen (Russian: Фадде́й Фадде́евич Беллинсга́узен, romanized: Faddéj Faddéevič Bellinsgáuzen; 20 September [O.S. 9 September] 1778 – 25 January [O.S. 13 January] 1852), a Russian naval officer, cartographer and explorer of Baltic German extraction, who ultimately rose to the rank of admiral. He participated in the First Russian circumnavigation of the globe and subsequently became a leader of another circumnavigation expedition that discovered the continent of Antarctica. Bellingshausen was born on Osel Island. Read more on Wikipedia

Since 2007, the English Wikipedia page of Fabian Gottlieb von Bellingshausen has received more than 204,486 page views. His biography is available in 53 different languages on Wikipedia making him the 42nd most popular explorer.