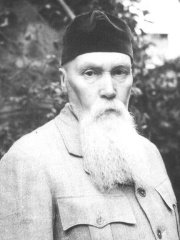 Nicholas Roerich (; October 9, 1874 – December 13, 1947), also known as Nikolai Konstantinovich Rerikh (Russian: Никола́й Константи́нович Ре́рих), was a Russian painter, writer, archaeologist, theosophist, philosopher, and public figure. In his youth he was influenced by Russian Symbolism, a movement in Russian society centered on the spiritual. He was interested in hypnosis and other spiritual practices and his paintings are said to have hypnotic expression.Born in Saint Petersburg, to a well-to-do notary public Baltic German father and to a Russian mother, Roerich lived in various places in the world until his death in Naggar, Himachal Pradesh, India. Read more on Wikipedia

Nicholas Roerich was a Russian painter, philosopher, archaeologist, and public figure. He is most famous for his paintings of the Himalayas.

Among PAINTERS In Russia