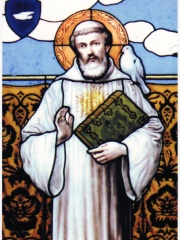 Columbanus (Irish: Columbán, 540 – 21 November 615), also known as St. Columban, was an Irish missionary notable for founding a number of monasteries from around 590 in the Frankish and Lombard kingdoms, most notably Luxeuil Abbey in present-day France and Bobbio Abbey in present-day Italy. He is remembered as a key figure in the Hiberno-Scottish mission, or Irish missionary activity in early medieval Europe.In recent years, however, as Columbanus's deeds and legacy have come to be re-examined by historians, the traditional narrative of his career has been challenged and doubts have been raised regarding his actual involvement in missionary work and the extent to which he was driven by purely religious motives or also by a concern for playing an active part in politics and church politics in Francia.Columbanus taught an Irish monastic rule and penitential practices for those repenting of sins, which emphasised private confession to a priest, followed by penances levied by the priest in reparation for the sins. Read more on Wikipedia

Since 2007, the English Wikipedia page of Columbanus has received more than 274,777 page views. His biography is available in 32 different languages on Wikipedia making him the 509th most popular religious figure.

Page views of Columbanuses by language