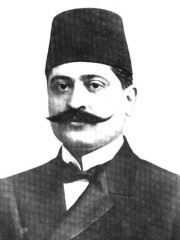 Mehmed Talaat (1 September 1874 – 15 March 1921), commonly known as Talaat Pasha or Talat Pasha, was a Turkish Ottoman politician and convicted war criminal of the late Ottoman Empire who served as its de facto leader from 1913 to 1918. Talaat Pasha was chairman of the Union and Progress Party, which operated a one party dictatorship in the Ottoman Empire during World War I. The Armenian genocide and other ethnic cleansing operations were undertaken during his time as Minister of Interior Affairs. Born in Kırcaali (Kardzhali), Adrianople (Edirne) Vilayet, Mehmed Talaat grew up to despise Sultan Abdul Hamid II's autocracy. Read more on Wikipedia

Talaat Pasha was most famous for his role in the Armenian Genocide. He was a Turkish politician and one of the three members of the Young Turk triumvirate that ruled the Ottoman Empire from 1913 to 1918.

Among politicians, Talaat Pasha ranks 1,173 out of 15,710. Before him are Abdelaziz Bouteflika, Justin II, Afonso V of Portugal, Asa of Judah, Eric XIV of Sweden, and Camille Desmoulins. After him are Jahangir, Antoine of Navarre, Oswald Mosley, Shang Yang, Antiochus I Soter, and Muawiya II.