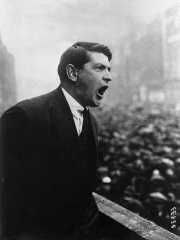 Michael Collins (Irish: Mícheál Ó Coileáin; 16 October 1890 – 22 August 1922) was an Irish revolutionary, soldier, and politician who was a leading figure in the early-20th-century Irish struggle for independence. He was Chairman of the Provisional Government of the Irish Free State from January 1922 until his assassination in August 1922. Collins was born in Woodfield, County Cork, the youngest of eight children, and his family had republican connections reaching back to the 1798 rebellion. Read more on Wikipedia

Since 2007, the English Wikipedia page of Michael Collins has received more than 133,168 page views. His biography is available in 57 different languages on Wikipedia making him the 2,091st most popular politician.

Among politicians, Michael Collins ranks 2,076 out of 14,801. Before him are Odilo Globočnik, Manasseh, Chiang Ching-kuo, John, Prince of Asturias, Ezer Weizman, and Abdullah II of Jordan. After him are John Sigismund, Elector of Brandenburg, Emperor Nakamikado, Archduchess Maria Josepha of Austria, Juraj Jánošík, Al-Amin, and Abe no Seimei.