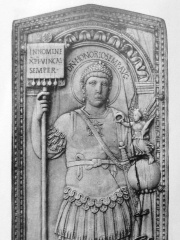 Flavius Honorius (9 September 384 – 15 August 423) was Western Roman emperor from 395 to 423. He was the younger son of emperor Theodosius I and his first wife Aelia Flaccilla, and brother of Arcadius, who was the Eastern Emperor from 395 until his death in 408. In 410, during his reign, Rome was sacked for the first time in almost 800 years.Even by the standards of the rapidly declining Western Empire, Honorius's reign was precarious and chaotic. Read more on Wikipedia

Since 2007, the English Wikipedia page of Honorius has received more than 23,002 page views. His biography is available in 63 different languages on Wikipedia making him the 454th most popular politician.

Page views of Honoriuses by language

Among politicians, Honorius ranks 450 out of 14,801. Before him are Valerian, Goliath, Constantius II, Christian VII of Denmark, Tiberius Gracchus, and Zhou Enlai. After him are James II of England, Patrice Lumumba, Sukarno, Mahidevran, Constantius Chlorus, and Ptolemy II Philadelphus.