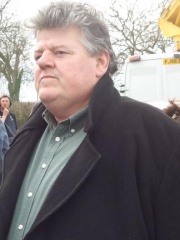 Anthony Robert McMillan (born 30 March 1950), known professionally as Robbie Coltrane, is a Scottish actor, comedian and writer. He gained worldwide recognition as Rubeus Hagrid in the Harry Potter film series (2001–2011), and as Valentin Dmitrovich Zukovsky in the James Bond films GoldenEye (1995) and The World Is Not Enough (1999). He was appointed as Officer of the Order of the British Empire (OBE) in the 2006 New Year Honours by Queen Elizabeth II for his services to drama. Read more on Wikipedia

Robbie Coltrane is most famous for his role as Hagrid in the Harry Potter series.