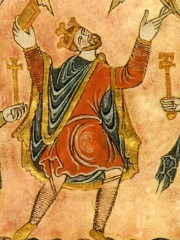 Edgar (Old English: Ēadgār [ˈæːɑdɡɑːr]; c. 943 – 8 July 975), known as the Peaceful or the Peaceable, was King of the English from 959 until his death in 975. The younger son of King Edmund I and Ælfgifu of Shaftesbury, he came to the throne as a teenager following the death of his older brother, King Eadwig. As king, Edgar further consolidated the political unity achieved by his predecessors, with his reign being noted for its relative stability. Read more on Wikipedia

Page views of Edgar the Peacefuls by language

Among politicians, Edgar the Peaceful ranks 1,813 out of 15,577. Before him are Kurt Daluege, Werner von Fritsch, Chiang Ching-kuo, Julia Drusilla, Catherine Cornaro, and Agha Mohammad Khan Qajar. After him are Maria Josepha of Austria, Marcelo Rebelo de Sousa, Gongmin of Goryeo, Anna Maria Mozart, Constantine VI, and Michael the Brave.