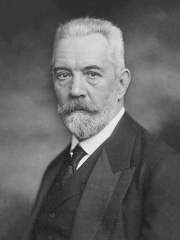 Theobald Theodor Friedrich Alfred von Bethmann Hollweg (29 November 1856 – 1 January 1921) was a German politician who was the chancellor of the German Empire from 1909 to 1917. He oversaw the German entry into World War I. According to biographer Konrad H. Jarausch, a primary concern for Bethmann in July 1914 was the steady growth of Russian power, and the growing closeness of the British and French military collaboration. Under these circumstances he decided to run what he considered a calculated risk to back Vienna in a local small-scale war against Serbia, while risking a major war with Russia. Read more on Wikipedia

Theobald von Bethmann-Hollweg was the Imperial German Chancellor from 1909 to 1917. He is most famous for his role in the July Crisis of 1914, which led to the start of World War I.