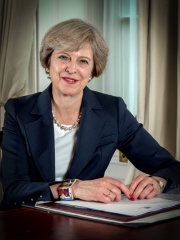 Theresa Mary, Lady May (; née Brasier; born 1 October 1956) is a British politician who served as Prime Minister of the United Kingdom and Leader of the Conservative Party from 2016 to 2019. May served as Home Secretary from 2010 to 2016 in the Cameron government and has been the Member of Parliament (MP) for Maidenhead in Berkshire since 1997. Ideologically, she identifies herself as a one-nation conservative.May grew up in Oxfordshire and attended St Hugh's College, Oxford. Read more on Wikipedia

Among politicians, Theresa May ranks 1,417 out of 15,710. Before her are Jehoiakim, William II of England, Peter of Castile, Gyula Andrássy, Chlodio, and Sulayman ibn Abd al-Malik. After her are Sarah Palin, Jeconiah, Shinzō Abe, Uzun Hasan, Halford Mackinder, and Isaac I Komnenos.