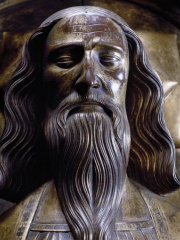 Edward III (13 November 1312 – 21 June 1377), also known as Edward of Windsor before his accession, was King of England and Lord of Ireland from January 1327 until his death. He is noted for his military success and for restoring royal authority after the disastrous and unorthodox reign of his father, Edward II. Edward III transformed the Kingdom of England into one of the most formidable military powers in Europe. His 50-year reign was the second-longest in medieval English history, and saw vital developments in legislation and government, in particular the evolution of the English Parliament, as well as the ravages of the Black Death. Read more on Wikipedia

Since 2007, the English Wikipedia page of Edward III of England has received more than 4,984,487 page views. His biography is available in 71 different languages on Wikipedia making him the 317th most popular politician.

Page views of Edward III of Englands by language

Among politicians, Edward III of England ranks 314 out of 14,801. Before him are Mary of Burgundy, Alexander Dubček, George III of the United Kingdom, Abdulmejid I, Bill Clinton, and Salman of Saudi Arabia. After him are Henry IV, Holy Roman Emperor, Elagabalus, Dido, Djoser, Indira Gandhi, and Lyndon B. Johnson.