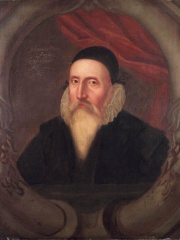 John Dee (13 July 1527 – 1608 or 1609) was an English mathematician, astronomer, astrologer, teacher, occultist, and alchemist. He was the court astronomer for, and advisor to, Elizabeth I, and spent much of his time on alchemy, divination, and Hermetic philosophy. As an antiquarian, he had one of the largest libraries in England at the time. Read more on Wikipedia

Since 2007, the English Wikipedia page of John Dee has received more than 2,181,706 page views. His biography is available in 49 different languages on Wikipedia (up from 48 in 2019). John Dee is the 5th most popular occultist, the 78th most popular biography from United Kingdom (down from 73rd in 2019) and the most popular British Occultist.

John Dee was a mathematician, astronomer, astrologer, and advisor to Queen Elizabeth I. He is most famous for his work on the Enochian system of magic.

Among occultists, John Dee ranks 5 out of 37. Before him are Nostradamus, Grigori Rasputin, Rajneesh, and Baba Vanga. After him are Helena Blavatsky, Count of St. Germain, Aleister Crowley, Alessandro Cagliostro, Anton LaVey, Allan Kardec, and Heinrich Cornelius Agrippa.

Among OCCULTISTS In United Kingdom