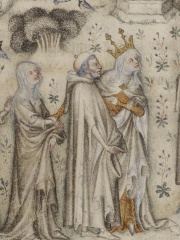 Guillaume de Machaut (French: [ɡijom də maʃo]; also Machau and Machault; c. 1300 – April 1377) was a French composer and poet who was the central figure of the ars nova style in late medieval music. His dominance of the genre is such that modern musicologists use his death to separate the ars nova from the subsequent ars subtilior movement. Regarded as the most significant French composer and poet of the 14th century, he is often seen as the century's leading European composer.One of the earliest European composers on whom considerable biographical information is available, Machaut has an unprecedented amount of surviving music, in part due to his own involvement in his manuscripts' creation and preservation. Read more on Wikipedia

Guillaume de Machaut is most famous for composing the Messe de Nostre Dame in the 14th century.