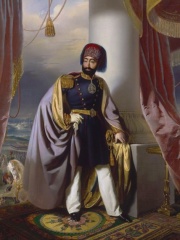 Mahmud II (Ottoman Turkish: محمود ثانى‎, romanized: Mahmud-u s̠ānī, Turkish: II. Mahmut; 20 July 1785 – 1 July 1839) was the 30th Sultan of the Ottoman Empire from 1808 until his death in 1839. His reign is recognized for the extensive administrative, military, and fiscal reforms he instituted, which culminated in the Decree of Tanzimat ("reorganization") that was carried out by his sons Abdulmejid I and Abdülaziz. Often described as "Peter the Great of Turkey", Mahmud's reforms included the 1826 abolition of the conservative Janissary corps, which removed a major obstacle to his and his successors' reforms in the Empire. Read more on Wikipedia

Since 2007, the English Wikipedia page of Mahmud II has received more than 914,616 page views. His biography is available in 72 different languages on Wikipedia (up from 67 in 2019). Mahmud II is the 232nd most popular politician (down from 230th in 2019), the 40th most popular biography from Turkey and the 22nd most popular Turkish Politician.

Mahmud II was the Sultan of the Ottoman Empire from 1808 to 1839. He is most famous for his modernization of the empire.

Among politicians, Mahmud II ranks 232 out of 15,710. Before him are Suleiman II, Harald V of Norway, Ferdinand II of Aragon, Leopold I, Holy Roman Emperor, Christina, Queen of Sweden, and Charles IX of France. After him are Lech Wałęsa, Sulla, Joe Biden, Olof Palme, Nicholas I of Russia, and Konrad Adenauer.