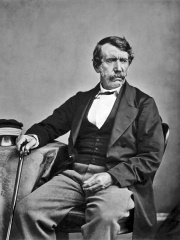 David Livingstone (; 19 March 1813 – 1 May 1873) was a Scottish physician, Congregationalist, and pioneer Christian missionary with the London Missionary Society, an explorer in Africa, and one of the most popular British heroes of the late 19th-century Victorian era. He had a mythic status that operated on a number of interconnected levels: Protestant missionary martyr, working-class "rags-to-riches" inspirational story, scientific investigator and explorer, imperial reformer, anti-slavery crusader, and advocate of British commercial and colonial expansion. Livingstone's fame as an explorer and his obsession with learning the sources of the Nile River was founded on the belief that if he could solve that age-old mystery, his fame would give him the influence to end the East African Arab-Swahili slave trade. Read more on Wikipedia

Among explorers, David Livingstone ranks 18 out of 405. Before him are Francis Drake, Francisco Pizarro, Prince Henry the Navigator, Jacques Cartier, Fridtjof Nansen, and Erik the Red. After him are Jacques Cousteau, Xuanzang, Leif Erikson, Thor Heyerdahl, Abel Tasman, and Vitus Bering.