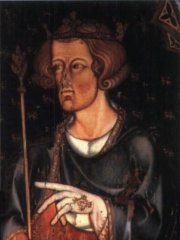 Edward I of England

Edward I (17/18 June 1239 – 7 July 1307), also known as Edward Longshanks and the Hammer of the Scots (Latin: Malleus Scotorum), was King of England from 1272 to 1307. Before his accession to the throne, he was commonly referred to as The Lord Edward. The first son of Henry III, Edward was involved from an early age in the political intrigues of his father's reign, which included an outright rebellion by the English barons. Read more on Wikipedia

Edward I was the King of England from 1272 to 1307. He is most famous for conquering Wales and Scotland, and uniting the countries of England and Wales.

Page views of Edward I of Englands by language

Among politicians, Edward I of England ranks 254 out of 15,710. Before him are Charles VII of France, Ferdinand II, Holy Roman Emperor, Pargalı Ibrahim Pasha, Francis I, Holy Roman Emperor, Georges Danton, and Edward III of England. After him are Oleg of Novgorod, Leopold II of Belgium, Georgy Zhukov, Ariel Sharon, Yuri Andropov, and Theodore Roosevelt.