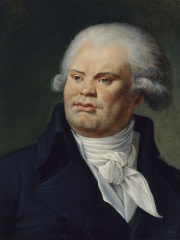 Georges Jacques Danton (French: [ʒɔʁʒ dɑ̃tɔ̃]; 26 October 1759 – 5 April 1794) was a French lawyer and a leading figure in the French Revolution. He became a deputy to the Paris Commune, presided in the Cordeliers district, and visited the Jacobin club. In August 1792 he became French Minister of Justice and was responsible for inciting the September Massacres. Read more on Wikipedia

Georges Danton was a French Revolutionary who was most famous for his role in the Reign of Terror.

Among politicians, Georges Danton ranks 252 out of 15,710. Before him are Godfrey of Bouillon, Mehmed VI, Charles VII of France, Ferdinand II, Holy Roman Emperor, Pargalı Ibrahim Pasha, and Francis I, Holy Roman Emperor. After him are Edward III of England, Edward I of England, Oleg of Novgorod, Leopold II of Belgium, Georgy Zhukov, and Ariel Sharon.