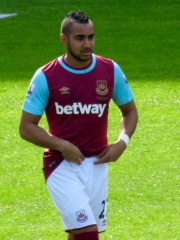 Dimitri Payet (French pronunciation: ​[dimitʁi pajɛt]; born 29 March 1987) is a French professional footballer who plays for Ligue 1 club Marseille and the France national team. A set-piece specialist, known for his accurate, bending free kicks, he primarily plays as an attacking midfielder, and is described as a player who is "blessed with terrific technique and dribbling skills".Payet was born on the French island of Réunion in the Indian Ocean, where he began his career playing for local clubs Saint-Philippe and Saint-Pierroise. In 1999, he moved to metropolitan France, joining Le Havre. Read more on Wikipedia

Others born in Réunion

Among SOCCER PLAYERS In Réunion